Do you think only a person who has received an education from a convent school can be a good writer ’cause it involves complex vocabulary and sophisticated grammatical principles? 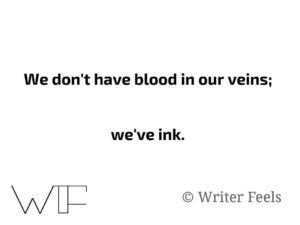 Then, here is something for you to read.

In fact, let me tell you a story.

“There is a guy who has had studied in a roadside school with 300 students. He used to memorize essays on ‘My Self’ and ‘My embarrassing moment’ to pass the English examination. For him, writing was a nightmare, as for him English was like the alien language chanted in a foreign tone.

Later he got admission in a missionary school where there was no scope of even speaking Hindi in the classroom. That was the brutally difficult phase of his life, ’cause there he failed miserably in first few months. There was nothing he could do except considering himself a loser for not having a good command over the English language when other peers of him had.
But then one day, he read the two life-changing lines.

“Others’ steadfastness isn’t an art. Your faltering footsteps is an art. Literature with an aim is a sheer nonsense.”

From that day he started to love his quirk and flaws and began to write in the leisure time. While walking along the road, he used to pick up torn pieces of newspaper and read them aloud in front of the mirror. To write in a passionate manner, he isolated himself from the world.

Every night he opened his diary to pen down his emotions, the night seemed to be a nanosecond.

In the earlier days he was mocked, insulted and got dampening jibes but those lines, they never let him give up on himself.”

And right now he is writing for a family of twenty-five thousand feelers known as Writer Feels. Even though he writes immature stuff; even laughable sometimes, but least, he’s trying. One day he will be a better writer for sure.

The point to be noted is this: Never judge yourself wrong. There’s only one thing you cannot do. It’s the thing which you’ve not tried.

My StorySingle Rule For Success