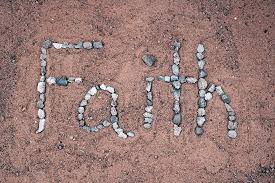 The most powerful thing in this world! Faith has survived everything.

Early men painted the caves because they had faith that someday someone in the future would like to hear their story. As mentioned in the Vedas, people use to organize Yajnas to impress Gods of rain so that they can have good rains and therefore good crop growth. People have their lucky stone, lucky number, lucky garment, lucky day and what not… why so? Only because they have faith in that particular thing!

Last weekend I met a few people who practice Buddhist Chanting from a very long time and came to know about their stories that how this practice has provided a big support to them in their life. But what basically made them all positive was their faith in the Buddhist Chanting. Same goes for the people who meditate saying Om/Aum, or any other guided meditations.

Faith keeps you up when you are falling down, and it keeps you positive when everything around you is negative. That is why you remember God when you are in a trouble because you have faith in Him. People who are atheist have their faith in their luck, or in someone who is close to them. But the most important thing to have faith in is your work! You would have felt so happy when someone believes in you or in your work, and faith in work gives you a lot of confidence and self-motivation.

The Placebo effect, where patients are given normal sugar pills and told that these are real medicines that will cure their disease. Results of this test are unbelievable. Patients have shown improvements only because they have faith in the medicines and doctor. As I have mentioned in my book, Single Rule For Success – “brain is dumb”! Your brain and body believe whatever you want it to believe. You have got unmatched potential to do great things in your life!

Have faith in yourself and in your work!