Hatred : Its a part of us now! 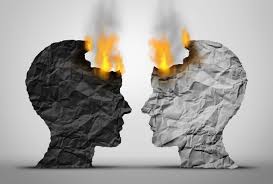 Hatred is everywhere! I maybe wrong, but I guess only at the places where politicians, media and social media are absent, hatred finds it difficult to survive. Let’s understand whats and whys of Hatred:

It is stronger than strongest of the bonds,
but trust me, its like a time bomb!
Deeper than the roots of the oldest tree,
This world fills this in you for free.

People say wrong, that, only Love makes you blind.
Please, don’t feed on hatred,
because it brings out evil from the kindest of the kind.

I guess, Hatred is the king of negativity.
It plays games with your mind,
while you are not aware,
and once it is on the driver seat,
you won’t have a drop of love to spare.

It sucks all of your positive thoughts, and inner peace.
You roam around judging people, like hatred’s pet on leash.

Like adding a pinch of Garam Masala to it, or like Ghee in fire,
Social Media has just acted as catalyst, in making hatred the live wire!

People vomit on social media, they now have lost manners,
and showcase their vomit on posters and banners.

I was taught as a kid, that internet is helping to connect.
It provides globalization.
I guess this uncontrolled structure,
is acting more towards breaking nations.

If social media is the winner, TV media is not far behind.
It always tries to give a cut throat competition,
by its unimaginable imagination.

They show 24*7 really stupid sh*t,
and call any random guy on the show as topic specialist!

To grow a nation, media has the power and ability,
but it has totally forgotten that with power comes responsibility.

I really don’t want to go too deep,
about news channels,
Hatred’s son Anger will attack me,
If we discuss about their fantastic discussion panels.

Now comes, politicians!
It will be wrong to blame all of them,
but many are like a fake gem.
If they are in your hand, you like to showoff a little bit,
but they are cheap and not worth it.

They don’t have a clue what they are selected for,
Earn money and power is their only vision for sure!

Please understand! Hatred is taking lives.
We have enough of us, may be that’s why lives doesn’t matter!
But what if someone close to us, never comes back home?
Riots and shootouts will kill all on the land, even the ones in the womb.

Share your ideas to stop hatred, not for division.
If anyone spreads it, make sure they understand that your brain has no provision.
If we still believe in people who want to divide and rule,
Then my friend, similar to what we have seen multiple times, there will again be an invasion.

Here’s a little poem for children which they should be taught in schools:

Hate Hate Go Away,
Never Come Back Again,
We have Love here to play,
When you come, you scare Love away.